JavaScript and the Browser

JavaScript execution occurs on the main thread and is one of the significant areas of focus with pagespeed optimization. Client-side JavaScript depends on the browser to coordinate the execution of code.

Depending on how the code is crafted and the instructions set for the browser, JS could potentially block the DOM Construction process, delay rendering, or "clog" the main thread, which can increase the initial page load time.

When a page is loaded, JavaScript is initialized as follows:

Web APIs and the JavaScript Language

The way browsers handle JavaScript is often not well understood.

Browsers use web APIs to connect code from files to the browser. APIs like Document provide the JavaScript language with a connection to the HTML and styling of a webpage. For example, the Document method querySelector can be used to find a specific HTML node. Additionally, the Window API can be used to discover information about the browser, like the width and height of the viewport. JavaScript can use the Window API to perform actions like navigating to different URLs or scrolling to a specific area.

It's important to understand this distinction because browser's provide certain features that we can utilize to optimize JavaScript on the main thread.

The event loop is a browser feature that coordinates the execution of functions. The event loop checks several queues containing functions. Functions are called and then removed from the associated queue when the function exits (finishes running). 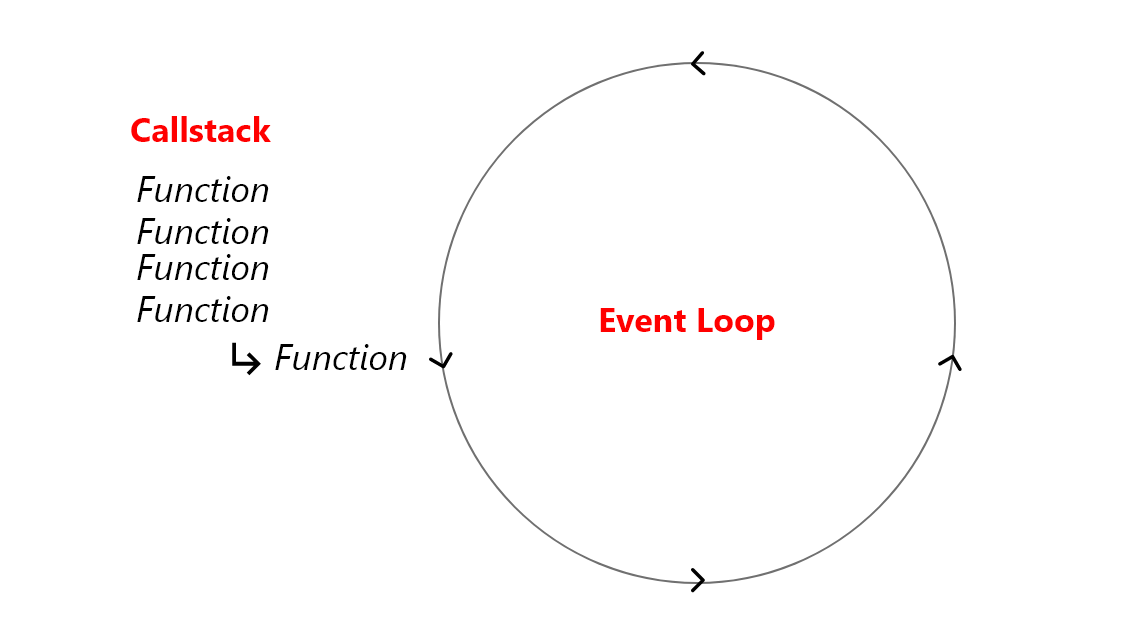 The call stack is the highest priority queue containing functions that are to be executed on the main thread. It's useful to examine the call stack to trace the order and duration of functions.

Since the browser's main thread is single-threaded, functions from the call stack execute one after the other and not simultaneously (in parallel).

Tracing Functions on the Timeline

On our devtools timeline, we can trace the order and timing of functions by reviewing the rows under the Evaluate Script task.

This call tree enables the tracing of function timing and duration. The call tree represents what is occurring in the call stack.

Examining the main thread in the performance tab, we can see how the following functions execute in the expected order.

These same-scoped functions execute one after the other. The timeline represents this by separating these functions into different columns on the same row.

Since the associated JavaScript was included in the <body> of the page, the functions finish executing before the DOMContentLoaded event.

Since functions execute one after the other and occur on the main thread, a long execution time can cause a ripple effect of optimization issues.

Nested Execution on the Timeline

Note: Since functions can't execute simultaneously, nested functions in the call tree on the performance timeline can cause some confusion.

Nested functions appear in separate rows below the function they originated from.

In addition to the call stack, modern browsers manage the execution of certain callback functions. These functions do not immediately block the main thread and are deferred until later (around the time the DOM finishes loading).

There are some operations, like ajax and web requests, events, and timers, that trigger a callback function on the main thread.

For example, setTimeout() is a timer method provided by the browser. It executes a callback function after a defined duration.

Once the 2 second timer is finished and the current callstack is empty, the setTimeout callback someCallback() is added to a queue containing callbacks and then executed on the main thread.

Due to the fact that the call stack takes the highest priority, a setTimeout with a timer set to 0 is still executed after the functions in the callstack.

Despite a zero delay and this script being included in the <body>, the second function executes around the DCL time.

The first() and third() functions block the main thread and are added to the callstack and execute before DOMContentLoaded.

Consider a scenario where an inline script is inserted above a node (.nodeAfter) that the JS depends on.

This triggers a console error.

The JS isn't able to find the .nodeAfter selector because it doesn't exist in the DOM tree by the time the script is executed.

Since the MutationObserver (see Measuring Performance) shows the script being discovered by our DOMParser before the .nodeAfter and since we know that scripts are evaluated when they are found by the parser, it makes sense that the document.querySelector method can't find the matching node on the Document because it actually hasn't been added to the Document yet.

How can JavaScript find nodes added after the script insert location?

There are may ways to handle this situation, but a common way is to use the DOMContentLoaded event listener, which fires a callback function after the DOM finishes parsing.

An exceptionally long DOMContentLoaded time impacts the function called by the event listener. In some cases, this might not be optimal. As a result, it's usually important to optimize the overall DCL time.